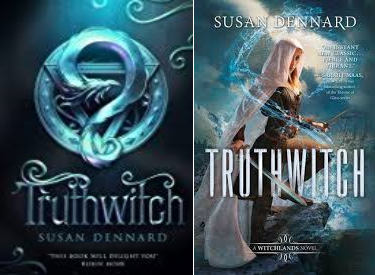 Introduction to the review.

So this blog post is all about the amazing book Truthwitch by Susan Dennard, the first in four books regarding a fictional world named the Witchlands. Other installments are Windwitch, Sightwitch and Bloodwitch.

Overview of the book.

Truthwitch follows several characters, namely Safi, Iseult, Merik and Aeduan. All of which have their own unique background that make their interactions with Dennard’s world different from the last.

The blurb can be found on Amazon.

My thoughts on the plot.

The book jumps straight into the plot for the rest of the novel. Safi and Iseult are in the midst of an awkward situation that kick off the rest of the story. We immediately get to know the dynamic between the two lead characters and their relationship is amazing. We are introduced to the other prominent characters in relatively quick succession, only waiting until Chapter Four to be introduced to Merik Nihar, while Aeduan is introduced as quickly as Safi and Iseult.

The development of the plot throughout all forty chapters keeps you hooked until the end, and even had me looking for more chapters as while the book had a good ending I just had to know more!

Truthwitch follows four characters for the main part, each with their own development. Throughout the book you see the characters grow, some for good some for the worse, and react to the changing situation around them. Dennard writes the characters so well you feel like you are on the emotional and physical journey with them.

Beware of spoilers in this section. If you haven’t read the book and want a spoiler-free review then skip this part until you see a header underlined and in bold.

Ok, those of you who have either read the book or who just love spoilers, get ready.

The overall themes for this book seem to me to concern bonds, between family, friends and friends that have become family. Dennard does not fully explain how the ‘threads’ of her world exist, but through reading you understand that these ‘threads’ are the bonds between people. They show the relationships between people, and Iseult is unique in that she can see these ‘threads’, through her eyes we can see how this fictional world works.

Dennard also explores the bonds that tie people to their responsibilities. Two of the main characters, Safi and Merik, are titled in their own lands. With the two characters we see how that responsibility sits with them. Merik considers his responsibility to his people to be one of the most important considerations in his actions. His whole story within this book is him trying to save his people with a trade contract. It governs a lot of his actions throughout the book. However Safi is quite different. She knows that she is a Domna of her homeland, but through her upbringing, in a different land, she distances herself from that role. Apart from one night, at a ball, she considers herself a completely different person than those who come below her in their society. When she later starts to consider a society in her actions it isn’t her own, instead she begins to care for the Nubrevnan people, Merik’s people. This is potentially because of the growing ‘thread’ between Safi and Merik.

Dennard also gives us a story line that shows that redemption arcs don’t always work. Towards the end of the book Aeduan is given a chance at redemption, but chooses not to. I have a feeling that this definitely comes into play in the next installments. It was quite unexpected on my part. As soon as the redemption opportunity presented itself to Aeduan I thought he was going to take it, most characters like him that I have read before take the chance. The fact that Aeduan doesn’t surprised and excited me. He is an odd character and one I look forward to reading more about.

An excellent story, well written and brilliantly exciting. Dennard makes you care for the characters, sometimes even the bad guys.

Not so good points.

This isn’t really a bad point, just something that threw me at the start. The whole concept of ‘threads’ was, understandably, alien to me. It took me a while to piece it all together to understand it. I don’t know if I was just slow on the uptake or not but it confused me a for a little while. Once I understood it completely though, I loved it.

Would I recommend the book?

Yes, completely. You should read it!